Contributions Made To Community Sailing In Bill Mosher’s Name 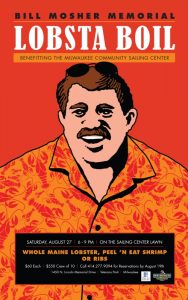 Hired as the original Executive Director of the Milwaukee Community Sailing Center in 1979, Bill was a strong force in establishing and driving the organization forward throughout the years. When he unexpectedly passed away in July 2015, Forespar offered to donate matching funds for donations made to the MCSC in Bill’s name.  One year later the campaign’s funds have been realized and over $7000 of total donations will be used to help fund a successful STEM (Science, Technology, Engineering & Math) youth sailing program and a portion of a needed “new” safety boat.

The Milwaukee Community Sailing Center has also decided to rename its popular annual lobster boil fundraiser in Bill’s honor.  Now known as the Bill Mosher Memorial Lobsta Boil, the event will be held on the MCSC grounds, August 27th. A memorial “rock” and plaque will also be dedicated to Bill’s lifelong efforts during the event.

Forespar® is one of the oldest, most established boat hardware manufacturers in the United States. They are the number one manufacturer of downwind sailing poles and their diverse line of marine products includes Leisure Furl™ boom furling systems, Marelon® plumbing fittings and numerous other marine related products.

The Milwaukee Community Sailing Center is a private, not-for-profit 501 (c) 3 agency located just north of downtown in the heart of Veterans Park at McKinley Marina. MCSC provides educational and recreational sailing programs to those who wish to gain access to Lake Michigan and learn to sail; regardless of age, physical ability or financial concerns.

Forespar is a company in which a team of dedicated boaters has continually advanced the quality of the sailing and powerboating experience since 1967. Founded by life-long boater Robert Foresman, the company has pursued his philosophy of innovation and quality to produce unique products which fill real needs. Today, the crew at Forespar oversees a multifaceted design, manufacturing and worldwide distribution system from its modern headquarters in Southern California using CAD/CAM design , full machine shop, 80’ spray paint booth, plastic injection molding and carbon composite processing. Forespar, along with its other widely recognized branded products including Leisure Furl, and Marelon, can be counted on by boaters to provide value and many years of enjoyment and performance. We are always leaders and innovaters; never followers and we strive to serve every boater. We invite you to visit our website www.forespar.com, and join our Facebook Fan Page.
View all posts by Mike Dwight
First and Only Train Ride to Catalina →
← Olympics: A sailing surprise as the water and conditions are ideal on Guanabara Bay