What Do You Do If the Battery Quits?

So, you’re half way to the Island.  It’s just after 10 pm, with no moon yet.  It’s bumpy, and the visibility is poor.  The 15 knot breeze is westerly, and the swell and wind waves are southwest.  You know you’re getting pushed off course, but that’s OK, since both diesels are thumping away, and the GPS is telling where you are (and what to steer to get to the mooring).

Then, the instruments go dark.  Yikes!  Now what? 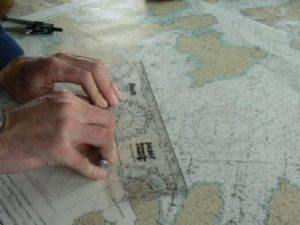 You have a compass mounted by the wheel.  You whip out the Chart Book, grab your pencil and mark the last GPS position on the chart, then use your parallels to pencil a line to your destination.  Then down to the compass rose, and determine a fair approximation of the compass course to the destination.  Steer that course, and you’re good.

You don’t have charts, parallels, etc.  And if you did, you don’t know how to use the low tech.  You may just want to go real slow and listen for surf, and look for the red/green flashers at the harbor entrance.  Not at all what you’ve planned, and not at all fun, even if it works out.

The kids, and grand-kids have asked “What are you doing?” when they see me using the hand-bearing compass for a quick sight at a point of land, make a line on the chart, and repeat the process in another direction.  I’d explain that where those lines cross is where we are – on the chart, and then explain the cross bearing, and how I got it, and how simple it really is.   Or, that same question when I scribble the time, course direction and speed when we’ve just cleared the harbor entrance, and an hour later walk over to the chart and draw a line, scribble some more, use the dividers, and draw an x.  I give a quick explanation of dead reckoning, and how easy it is (and always a good idea on that dark night or foggy day).

The next question was always “Why do you do that if you have a GPS?”  And answer always is “This will tell me where we are”.  No, it’s not as accurate as the WAAS GPS and the Chart Plotter.  But close enough if you’re talking to the Coast Guard (hope that doesn’t happen).  It was good enough before the electronics, and basic navigation still works – inexpensive, quick and easy use and easy to learn.

What do YOU do if the battery quits?

Summer of 1905-ish, Ole and Mrs. Evinrude were picnicking on Lake Okauchee in Wisconsin.

Ole was sent for ice cream, and he rowed to shore, and bought the ice cream.  By the time he got back to the family, the dessert had melted.  Ole, the machinist and combustion-engine tinkerer, was a bit irritated.  In 1907, he came up with a 1.5 horse transom-mounted gasoline powered outboard motor.

In 1911, he patented his invention, and in 1913 sold his interest to his partner in the Evinrude Motor Corporation.  After five years off, he introduced a 3 hp aluminum model that weighed 48 pounds.  He then joined forces in 1929 with his old company and Johnson Motor Company, and created the small boat revolution.

You can still buy a two-cylinder Evinrude – or one with up to 300 horsepower.