We all tend to think our yacht clubs are the best, with outstanding locations, views and often, history.  We are often partially right.

Then, there’s the Royal Yacht Squadron, at Cowes, in England.  The building is a castle, built in 1539 by Henry VIII to defend against the French.  The club itself was formed in 1815 by a group of “gentleman” yachting enthusiasts, and was given a Royal warrant by George IV (he was a member) in 1815.  This  was BF (Before Forespar).  The crenelations in the wall were built for cannons, and are still used for the race guns (brass cannons). 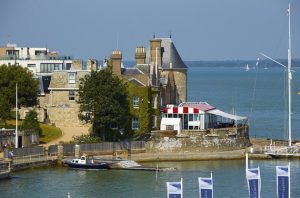 The white structure on the right of the photo below was added in the 1800’s to accommodate the start/finish line end, and race committees And is now know as “The Verandah”

Membership is by invitation, and consist largely of Dukes, Lords, Honorable and Knights (Sir Ben Ainsley).  Sir Thomas Lipton of America’s Cup and tea fame was turned down in 1898 because he was “in trade”, but admitted later in his life..
The burgee is the Royal Navy White Ensign, granted by warrant in 1829 (Now that is definitely cool).
The original race for the Hundred Guineas Cup, donated by the RYS, was hosted here in 1851 with the same start/finish line as Cowes Race Week, etc., that is used today.
It should be noted that no British crew has ever won that trophy, known as the America’s Cup, in the160 years since.  Sail Fast, Oracle…
Mike Dwight
Mike Dwight January 24, 2017 Category: Uncategorized.

Using two anchors is usually a bad weather practice, or used for security where there are current or wave issues.  But how you deploy two sets of ground tackle depends on your situation and a number of variables, including the wind, water depth, sea state, and other boats in the area. For example, do you set both off the bow, or one off the bow and the other off the stern?  That tried and true practice does keep the boat from swinging, and keeps your bow in the preferred direction.  Most of us use the bow/stern because of current, wind, etc., or in an anchorage where the boat’s swing is likely to be limited by other boats.

The easy way to hook is the simplest.  Set the bow anchor, pay out excess rode, and drop the stern hook, then set that by powering forward toward the original hook while taking in the original excess rode.  Once the boat is where you want it, cleat off both rodes, making sure you have adequate scope on both anchors.

A second, and confortable way to use two anchors to limit swing is a Bahamian Moor.  Set the anchors as above, then walk the stern line around to the bow, and cleat accordingly.  Yes, the rodes can get twisted, so check and adjust regularly.

One last item:  Remember to buoy/mark the anchors when you can.  You never know when a less experienced boater will come in and anchor on top of yours,