“Reefing and stowing are equally easy. It’s a one–man job…my full-roach sail looks like a Spitfire’s wing in the sunshine and cuts the gale cleanly in a blow.” Tom Cunliffe is a British yachting journalist, author and broadcaster.

For more info about Tom, check out: www.tomcunliffe.com/about/ 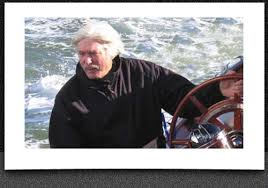 “For a cruising couple, the idea of flying a spinnaker day after day on a passage, is unrealistic.  Flat out, you need to be able to pole out a Genoa, which allows you keep sailing fast, even in squally weather, and the Forespar Whisker Pole is the best in the business. On a recent transatlantic, the pole was deployed 15 days during the 17 day passage.  Even with a full crew, we flew the spinnaker three days.  Do the math; the Forespar Whisker Pole is the key to trade wind sailing.”

“My latest yacht came with a retro-fit Leisure Furl™ in-boom reefing system…Three years and several thousand miles on I wouldn’t change it for the world.” Tom Cunliffe is a British yachting journalist, author and broadcaster.

For more info, check out: www.tomcunliffe.com/about/

Known as the “Freedom Frigate”, in 1781, the Hermione carried the Marquis de Lafayette to deliver news of France’s participation in the American Revolution. The Marquis arrived in Yorktown aboard the vessel Hermione on March 14, 1781, where he played a key role in the naval blockade that led to the surrender of Cornwallis and the end of the American war later that year.

Fast forward to 1995, when a small group of French enthusiasts dreamed of reconstructing an exact replica of General Lafayette’s 18th-century Hermione. The plan envisioned the Hermione sailing to the US – bringing to life a recreation of the voyage made by Lafayette and re-affirming the historic relationship between the US and France.

The vision now reality, the majestic Hermione was reconstructed in France using 18th Century shipbuilding techniques. The vessel is the largest and most authentic Tall Ship to be built in the last 150 years.

In the spirit of friendship and to celebrate France’s important role in helping our nation’s founding, the Hermione US journey begins in France on April 18, 2015 and will call on American ports during the summer.

The crossing is expected to take 27 days, before making landfall at Yorktown, VA. Crossing the Atlantic, Hermione’s first voyage will begin in France from the mouth of the River Charente, in Port des Barques (where Lafayette first boarded on March 10th, 1780).

The 72-member French volunteer-crew makes its first stop in Virginia. The Hermione will then sail up the east coast – near Washington DC at Mt. Vernon and Alexandria, then on the Annapolis, Baltimore, Philadelphia, NY, Greenport, Newport, Boston – then leaving America, on to Castine, and Lunenberg/Halifax, Nova Scotia before heading back to France.

The Hermione Voyage 2015 is part of an outreach program with cultural events, exhibitions, and educational programs that celebrate the trip and mark its progress. Learn more about the Hermione American Journey: http://hermione2015.com/press/dec22.pdf

Christened “America’s Adopted Son” Marquis de Lafayette became a true hero of America and was officially. The eager 19-year-old Lafayette sailed the original Hermione to America In the late 1700s. He immediately became a volunteer in the fight against the British, was commissioned Major General, and became a pivotal player in helping secure American Independence. Later wounded Lafayette returned to France, but remained a steadfast supporter of America. Returning to Boston on March 19, 1780, aboard the Hermione, Lafayette was greeted with a heroes’ welcome with a 13-gun-salute. In 1781 Lafayette was dispatched to the Virginia frontline; the Hermione was sent to Philadelphia, where using stealth tactics, she assisted in fighting the British as part of the blockade that sealed the defeat of the British. In 1782 Lafayette left Washington to return to France.

Watch this Forespar Leisure Furl™ Downwind Sailing video and learn how easy and safe it is to reef on downwind sail.

“My Forespar 50/50 Whisker Pole is mounted on a mast track. It’s simple to deploy and adjust, and I use it anytime I am sailing off the wind. It’s the main reason why Quetzal always logs fast passages; I just don’t accept sail slating or having to tack down wind.”

“The ability to sail directly toward a downward mark, whether it is 20 miles or 2,000 miles away, is the key to fast and efficient passage making.  You need a whisker pole to make this happen. My Forespar 50/50 Whisker Pole has performed brilliantly in one ocean crossing after another.

“We all dream of trade wind sailing, without a whisker pole reaching day after day can turn into a sail slating nightmare. My Forespar Whisker Pole has logged many thousand miles, quietly keeping the Genoa drawing as the miles rush away below the keel.”