Attention Southern California PHRF racers! It’s time – once again – for the Long Beach to Dana Point Race. This 39 mile course for PHRF Classes and a shorter course for the Cruising Class is lots of fun for you and your crew! A great race to celebrate the end of summer with your family. 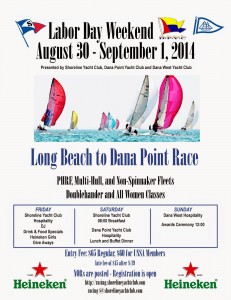 Thursday evening marked the end of Dana Point Yacht Club’s weekly ‘Thirsty Thursday’ race series. With the large swells and strong wind from Hurricane Marie, the sailing did not disappoint and provided an excellent final race for the 18 race series.

The wind was blowing hard out of the North, gusting up to 15 mph. The Catalina 30 ‘Bon Vivant’ I was racing on competed against two J 24’s, ‘Superstrings’ and ‘Whasabe 2’, and a Santana 30, the ‘Amancer de la Libertad’ in the PHRF-C class. Although only a few boats in our class showed up, the racing proved to be exciting.

Tacking back and forth, we managed to get a good upwind position on the line, and crossed the pin a couple of seconds after the start gun. We made our way to the first mark close hauled on a westerly heading. It was a close battle between the two J 24’s all the way. Fighting for every inch, we soon paralleled Super Strings. Being windward, we avoided being pushed off by the leeward Superstrings. We were the first boat to reach the mark with a good distance between the other two boats.

As we rounded the mark, I set our Forespar whisker pole so that we would have the advantage sailing down wind on a southerly heading. Extending the pole, I was able to dramatically increase our genoa sail area. Additionally, we were able to sail wing-on-wing because we had deployed our pole. Neither of the other J 24’s used a pole, and could not sail wing-on-wing and their genoas were being back filled by the main. Their genoas could not stay nearly as open and catch as much wind as ours could. We soon increased our lead over the other boats because we used our whisker pole.

Once we rounded the downwind mark, we made our way back to the first mark. We were still in first for a good majority of that leg. However, Superstrings made the decision to tack up and then back down to the mark, while we decided to hold our heading. With this move, Superstrings was able to maneuver themselves into first place. We rounded the mark and then made our way on a beam reach to the Dana Point harbor breakwater.

As soon as we entered the harbor, we experienced strong gusts and surges. This was last leg of the race, where we would have to tack up the channel and cross the point where the Dana Point Yacht Club is located. The next 10 minutes we constantly tacked while sailing close hauled. This was the most exciting part of the race because of the constant tacking. As we approached the finish line, we avoided hitting the sandbar, which the Flying Tiger 10 ‘Ruckus’ had done. We crossed the line in second place with a corrected time of only 29 seconds behind Superstrings. Whasabe 2 finished five minutes behind us. The Amancer de la Libertad did not finish the race (probably because they missed their start time and went with the wrong group). Taking second place was a great result and an exciting way to finish of the summer sailing series.

Baby (Seal) on Board

Check out this incredible video of a baby seal climbing on this surfer’s board!

“Taking this American icon, the oldest surviving commercial ship in the country, out on her 38th voyage was a landmark achievement for Mystic Seaport,” said seaport president Steve White. “We truly accomplished our mission to celebrate our nation’s shared maritime heritage.” (NBC)

The Morgan embarked on its very first voyage in the year 1841. America’s oldest commercial whaling ship, the Morgan played a vital role in American maritime history. On August 6th, she returned home to Mystic Seaport in Connecticut to a warm welcome celebration.

The recently reported story making headlines discusses the discovery of an old ship which was found at the excavation site of the 9/11 Twin Towers. Although the discovery was made four years ago, scientists have recently reached an explanation for the mysterious find.

Discovered 22 feet below street level, the Hudson River Sloop was constructed from what scientists believe is the same white oak tree wood that was used to build Independence Hall in Philadelphia. The rings in the wood suggest that it was cut from the white oak trees in 1773, just two years before the Revolutionary War.