Home | Forespar Products in Use | What’s a Spinnaker Strut?
Tweet

And Why Do You Need One?

A spinnaker strut is a relatively short (usually aluminum) pole with one end fitting designed for mast attachment, and the other for running a line across a small internal pulley. Standard sizes range up to about seven feet in length and three or four inches in diameter. They look like this: 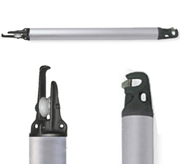 As its name implies, the strut is for use with a traditional symmetrical spinnaker. It will keep the afterguy (or the spin sheet you’re using as an afterguy) attached to the spinnaker pole away from lifelines, stanchions and other undesirable points on its way back to the stern. 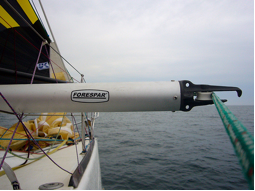 The strut is usually attached to the mast via a padeye on the mast, and often held in position with a sail tie to a shroud

Sailors want a reaching strut because:

And, more important – when sailing fairly close to the wind with the spinnaker, the pole is well forward. In a good breeze the afterguy or sheet is very heavily loaded. If that lifeline or stanchion (or both) bends enough, or breaks, the pole will slam forward into the forestay. Bad things can happen. Very bad things.

A reaching strut is easy to rig, and easy to use. Because it’s fairly short, it’s also easy to stow. And not expensive , especially when you consider the cost of a forestay or mast.

Forespar is a company in which a team of dedicated boaters has continually advanced the quality of the sailing and powerboating experience since 1967. Founded by life-long boater Robert Foresman, the company has pursued his philosophy of innovation and quality to produce unique products which fill real needs. Today, the crew at Forespar oversees a multifaceted design, manufacturing and worldwide distribution system from its modern headquarters in Southern California using CAD/CAM design , full machine shop, 80’ spray paint booth, plastic injection molding and carbon composite processing. Forespar, along with its other widely recognized branded products including Leisure Furl, and Marelon, can be counted on by boaters to provide value and many years of enjoyment and performance. We are always leaders and innovaters; never followers and we strive to serve every boater. We invite you to visit our website www.forespar.com, and join our Facebook Fan Page.
View all posts by Mike Dwight
Single Engine Parking →
← Keep Your Nose Up