Get the Kids on the Water!

US Sailing and others are pushing to get kids and young people out on the water sailing.  Not necessarily racing, but sailing.

My suggestions may be facile, but:  (a) Start them early, and (b) Keep them involved in the process when they’re out there – no passengers. 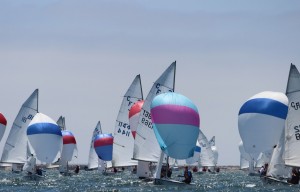 Our primary YC offers one of the finer Juniors’ programs on the West Coast.  While we have some superb racers in the Junior ranks, many race in the Harbor for the competitive fun of it, many sail just for the fun.  We start Juniors in the “Starfish” program at about age five, when we can.  They’re more at summer camp than on the water, but they are exposed to fun part of boating, with a dose of responsibility. that can then graduate to on the water, first sailing with coaches, then Sabots (racing if they want to), then Optis, then Lidos for fun, or 420’s to race, etc.

And, while we’re at it, there are a number of racing skippers who make sure that competent (meaning safe)  juniors, mostly adolescents, crew on their boats for local PHRF races, and even on some of the distances races – again, no passengers.  One skipper sailed the Newport-Ensenada race with eight kids and four adults, finishing fifth in a class of 15. All the juniors on that crew are sailing.  Five are still racing , three on a national level, and three sail for fun.

The end result has been sailors who started in the Club at five, with about half of a twenty-year program philosophy still sailing (and that doesn’t count the power boaters).  That means BCYC Junior sailing program has produced about 200 sailors still on the water, and more than that overall in recreational boaters.

That also means a pretty good crew pool for those of us who race a lot.

Make it fun, and they will come.

Forespar is a company in which a team of dedicated boaters has continually advanced the quality of the sailing and powerboating experience since 1967. Founded by life-long boater Robert Foresman, the company has pursued his philosophy of innovation and quality to produce unique products which fill real needs. Today, the crew at Forespar oversees a multifaceted design, manufacturing and worldwide distribution system from its modern headquarters in Southern California using CAD/CAM design , full machine shop, 80’ spray paint booth, plastic injection molding and carbon composite processing. Forespar, along with its other widely recognized branded products including Leisure Furl, and Marelon, can be counted on by boaters to provide value and many years of enjoyment and performance. We are always leaders and innovaters; never followers and we strive to serve every boater. We invite you to visit our website www.forespar.com, and join our Facebook Fan Page.
View all posts by Mike Dwight
Further: Kids on the Water →
← Overboard at Night