What’s The Yellow Pole with the Orange Flag?

Home | Forespar Products in Use | What’s The Yellow Pole with the Orange Flag?
Tweet

That head in the water is getting away from you at 10 feet per second, and you’re only going six knots. So, in the five seconds it takes you to react, she’s already 55 feet away. 10 seconds, she’s 110 feet astern.  If there’s any kind of sea running or a foot of chop, how long before you lose sight of that head, life jacket or not?

Just for training, wad up a paper bag or some wrapping paper, or blow up a balloon to about the size of your head. Toss it over side when you’re under way, and time yourself. It can be hard to find. 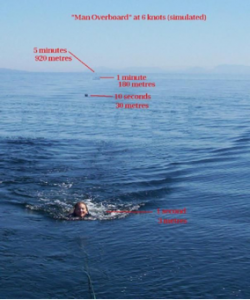 That’s why savvy sailors have that yellow pole with the orange cylinder at the base up along the rigging at the back of the boat. It’s a MOB (Man Over Board) pole.

The MOB pole is attached to the stern pulpit at the base, and to the backstay, enclosing the flag at the top. 50 or more feet of line (yellow) is tied to the float on the pole, and the other end to your horseshoe buoy. The picture below shows the basic pole in two parts for shipping, and how it might be mounted. 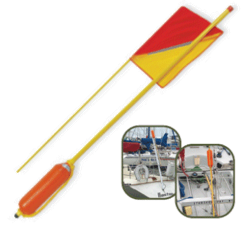 Deploying the pole is simple – a quick reach back from the helm, lift the pole from its seat, and drop it, reach over, and throw the horseshoe – not necessarily in that order – as long as it’s done quickly.

Now, there’s a high-visibility flag and pole six to ten feet high in the immediate vicinity of your overboard crew. The skipper and crew can track the person the water using the flag, making it much easier to take in sail and get the boat around and back to that flag. You will come up on the windward side of the flag, grab the pole, and reel in the horse shoe with the errant crew member.

A number of sailboats, particularly racers, have an installed horizontal tube, open at the transom. The pole in inserted flag end first, with the line coming out of the transom to the horseshoe. The horseshoe is thrown, and the resulting drag pulls the pole out toward the person in the water.

Many skippers attach a light to the pole. You may not see the pole/flag at night, but you will see the light. Obviously a good idea, and one we’ve used for years of cruising and offshore racing.

Get the pole and install it. You may never need to use it, but if you do, you will need it.

Forespar is a company in which a team of dedicated boaters has continually advanced the quality of the sailing and powerboating experience since 1967. Founded by life-long boater Robert Foresman, the company has pursued his philosophy of innovation and quality to produce unique products which fill real needs. Today, the crew at Forespar oversees a multifaceted design, manufacturing and worldwide distribution system from its modern headquarters in Southern California using CAD/CAM design , full machine shop, 80’ spray paint booth, plastic injection molding and carbon composite processing. Forespar, along with its other widely recognized branded products including Leisure Furl, and Marelon, can be counted on by boaters to provide value and many years of enjoyment and performance. We are always leaders and innovaters; never followers and we strive to serve every boater. We invite you to visit our website www.forespar.com, and join our Facebook Fan Page.
View all posts by Mike Dwight
Fog – MRASS Means Safer Navigation for ALL Boats →
← Great Reflexes