In February, 2015, US Sailing and AmericaOne announced a very exciting initiative, called Project Pipeline.  I want to give you a little personal perspective on the initiative and pass along the link to the press release.

Bob was excellent at identifying a need and then recruiting the support to make it happen. We all know that not only did Bob have great ideas, he would get them done!

Bob’s last target for improving US Olympic sailing was identifying our deficiency in the development of young sailors. As Bob’s cancer worsened, he asked me to take his place in working with the US Olympic Sailing Team on this important project.   Sadly, Bob passed away last March.

In the last year, we have developed a plan to increase training, support and opportunity for the youth of America.  Project Pipeline is about getting America back on the Olympic podium but also about raising the level of sailing talent in the US across the board.

“The top winning nations in sailing share the common trait of a well-formed talent development system,” said Josh Adams, Managing Director of US Olympic Sailing. “This is critical to sustainable success in Olympic sailing. With the extraordinary commitment of $5 million from the AmericaOne Foundation, we are in a position to launch a long-term initiative that will transform the way top young sailors train in the US.”

Targeting the best American youth talent, Project Pipeline is the strategy behind a new-look Olympic Development Program, which aims to better serve young sailors, lead them into high-performance boats earlier in their development, and build well-rounded sailors with complete skill sets. Providing training/racing opportunities with world-class coaching and the highest level of technical standards are the core principles of the initiative. 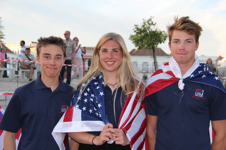 Forespar is a company in which a team of dedicated boaters has continually advanced the quality of the sailing and powerboating experience since 1967. Founded by life-long boater Robert Foresman, the company has pursued his philosophy of innovation and quality to produce unique products which fill real needs. Today, the crew at Forespar oversees a multifaceted design, manufacturing and worldwide distribution system from its modern headquarters in Southern California using CAD/CAM design , full machine shop, 80’ spray paint booth, plastic injection molding and carbon composite processing. Forespar, along with its other widely recognized branded products including Leisure Furl, and Marelon, can be counted on by boaters to provide value and many years of enjoyment and performance. We are always leaders and innovaters; never followers and we strive to serve every boater. We invite you to visit our website www.forespar.com, and join our Facebook Fan Page.
View all posts by Mike Dwight
Hybrid Yacht Powered by Natural Gas →
← Forespar Lifestyle Feature