Home | Forespar Products in Use | Rock and Roll
Tweet

There’s a place for rock and roll and it’s not on an anchored boat.

Salt water boaters often find themselves anchored or on a mooring. There’s a swell, a surge from the swell or just enough breeze to create some waves, all just enough to rock the boat. That rock can be strong enough to be uncomfortable. It is hard to sleep with a grip on the mattress, and an evening on the deck or in the cockpit isn’t very comfortable.

A flopper stopper is the solution. I’ve tried several types over the years, and settled on one that works across the board – the Roll-X™ from Forespar. The same system has dampened the roll quite well on my power boats (a Grand Banks 42 and a 28’ Wellcraft) and my sail boats (a Baltic 52, and a Soverel 33), as well as other vessels. 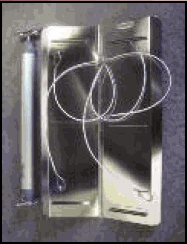 The Roll-X stabilizer consists of two stainless plates, about 12.5 by 40 inches, hinged together, and supported by a single line attached to a basic harness. It works simply. On the down roll, the unit folds together on the hinges, and drops deeper. On the up roll it unfolds, creating about seven square feet of resistance – sufficient to dampen a dramatic roll, completely quash a smaller wake or wind wave. And, the Roll-X has winglets to minimize the “skate” fore and aft while down, making the ride even more.

Roll-X stabilizer is most efficient when used with a pole to increase the leverage (one comes with the kit). You can see how on the trawler below.

Many sailors use the poles they’ve already got – spinnaker pole, a heavy whisker pole and often the boom. Swing it out on a halyard or topping lift, and couple of lines for guys and the crew is going enjoy a lot more stable time at anchor. 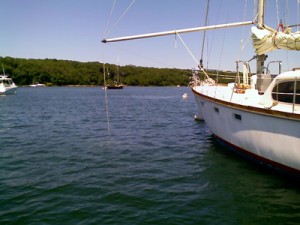 Candidly, the Roll-X stabilizer works pretty well as a flopper stopper with no poles, although using two (one on each side) helps make up for the lack of leverage. They are simply lowered over the side, down six or eight feet, and made fast to the cleats nearest the beam of the boat. Yes, we were in a hurry, or just too lazy to rig properly. They do work better poled out, and you must be sure to hoist the stabilizers in before weighing anchor and sailing away.

You can be sure that you’ll be well rested because you’ve experienced a lot less rock and roll.

Forespar is a company in which a team of dedicated boaters has continually advanced the quality of the sailing and powerboating experience since 1967. Founded by life-long boater Robert Foresman, the company has pursued his philosophy of innovation and quality to produce unique products which fill real needs. Today, the crew at Forespar oversees a multifaceted design, manufacturing and worldwide distribution system from its modern headquarters in Southern California using CAD/CAM design , full machine shop, 80’ spray paint booth, plastic injection molding and carbon composite processing. Forespar, along with its other widely recognized branded products including Leisure Furl, and Marelon, can be counted on by boaters to provide value and many years of enjoyment and performance. We are always leaders and innovaters; never followers and we strive to serve every boater. We invite you to visit our website www.forespar.com, and join our Facebook Fan Page.
View all posts by Mike Dwight
What Good is a Dinghy Davit on My Swimstep? →
← What is a Spinnaker Strut?